Dona Antonia – a story of the woman who changed the Douro forever. In a business dominated by men is the life of an extraordinary woman called Ferreirinha, from the Douro wine region of Portugal.

Antónia Adelaide Ferreira, known as Ferreirinha created an empire and kept its name, until today, associated with one of the most famous Port Wine brands.

In the 19th century, when the role of women in society was seconded, Antónia Adelaide Ferreira marks a generation and change, a business until then exclusive to men and, to a large extent, in the hands of the English.

When the powdery mildew arrived around 1870, destroying much of the Douro vineyards, Ferreirinha, which had stored huge quantities of wine in the previous years as a result of surplus production, puts its product on the market and multiplies its already considerable fortune. Then another disease affecting the vines called phylloxera, and this time with an unstoppable. This plague quickly spreads through the Douro, many producers disappear, wine is scarce and, of course, prices increase.

Ferreirinha’s company is also hard hit, but he decides to fight back. The solution ended up being found in the use of American vines, immune to phylloxera, and Ferreirinha then undertook a complete revolution in the way Douro wine was produced.

Antónia Adelaide Ferreira immediately became a symbol of the Douro, buying countless vineyards to prevent them from falling into the hands of the English, and developing important social works in the region such as hospitals, for example.

But who was this strong woman Ferreirinha?

Antónia Adelaide Ferreira was born in Peso da Régua, in 1811, in the midst of a wealthy Douro family, owner of many vineyards in the region. As wished by his father, José Bernardo Ferreira, she married her cousin, a man with little interest in the family business and who was busy wasting a substantial part of his fortune.

From this marriage two children were born, Maria de Assunção and António Bernardo Ferreira, and ended up widowed at the age of 33. It was here that his great entrepreneurial vocation awoke. He took charge of the business, confronted governments, and became increasingly wealthy and powerful. He married a second time, with José da Silva Torres and expanded his business interests beyond wine.

Her great passion was the Douro, the land he came from, with investments also in almond, olive and cereal plantations. Her jewel estate was the Quinta do Vesúvio, which is still today a reference in the production of Port Wine.

The history of the Douro cannot be mentioned without her name, life and action. The oldest demarcation region in the world owes this woman the impulse and entrepreneurship that would take Douro wines, especially port wine, to previously unknown levels.

The Dona Antónia Adelaide Ferreira prize is still awarded today, a distinction for Portuguese female figures who have somehow replicated the extraordinary example of Ferreirinha, whether in terms of social intervention or entrepreneurship in business.

Today, after more than 250 years, Ferreira is “the Portuguese brand”, the reference in excellent quality Port and Douro Wines, a symbol of a country and a culture that it proudly dignifies.

Casa Ferreirinha currently is one of a brands of Sogrape Vinhos.

Founded in 1942, the Sogrape Vinhos resulting in the creation of the iconic Mateus rosé, still today one of the most admired wine brands in the world. Currently managed by the third generation of the founding family, the company owns more than 750 hectares of vineyards in the main Portuguese wine regions and is responsible for the production of such renowned brands as Mateus rosé, Gazelle, Casa Ferreirinha and Sandeman. The company exports its wines to more than 70 countries.

It is vinified using the traditional Port wine method. The manually harvested grapes are gently crushed and, after partial removal of the stem, fermented with maceration, allowing the extraction of the best components of the grape skin. The entire process takes place under strict temperature and density control of the wine, allowing the producer to choose the ideal time for the addition of alcohol, essential to stop fermentation and maintain the natural sweetness of Port wine.

The final blend is composed of wines of different ages and origins, to obtain a consistency of style and quality typical of the Dona Antónia Reserve Tawny Port. Selected wines generally range from 4 to 12 years old, reaching an average age of about 7 years. 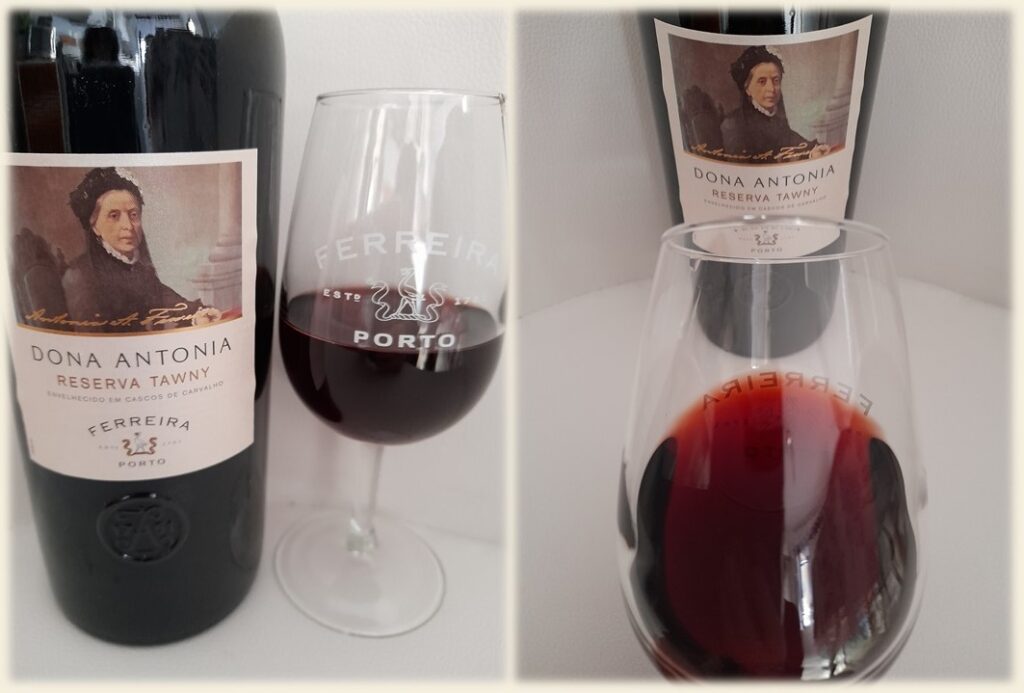 The wine presents a pale ruby color with a beautiful shine, and amber and orange tones at the edge, which reminds us of its maturation in the wood. And strong legs appear on the glass showing the 20% of alcohol content and the high sugar level in this Port.

On the nose, intense and rich in aromas, very ripe fruits (plum, blackberry, fig and cherry) with floral and jammy notes. Complex aromas of spices (cinnamon and cloves) and notes of nuts derive from the oxidation in the oak.

On the palate, this drink is full of fresh acidity which is in a good balance with sweetness, accompanied by aromas of dark chocolate, vanilla, cedar, toffee, raisin and prune. It is a full-bodied, fortified wine, slightly sweet, with excellent volume, rich flavors, extremely well balanced, which combines elegance with a delicate and persistent, pleasant finish, with a long-lasting dried fruits aftertaste.

The bottle should be stored in a cool environment, away from strong light, and lying on its side, with the wine in contact with the cork, at a temperature of 15 °C.

It is a more versatile Port wine which is very good served alone or accompanying with starters or as a dessert wine. It is pairing well also with any sweets, desserts and cheeses beautifully.

To tell the truth, I wasn’t a Tawny fan, so far… but this is a very pleasant dessert wine.

Amazing Porto wine from the Douro expressing the legacy of a remarkable woman. 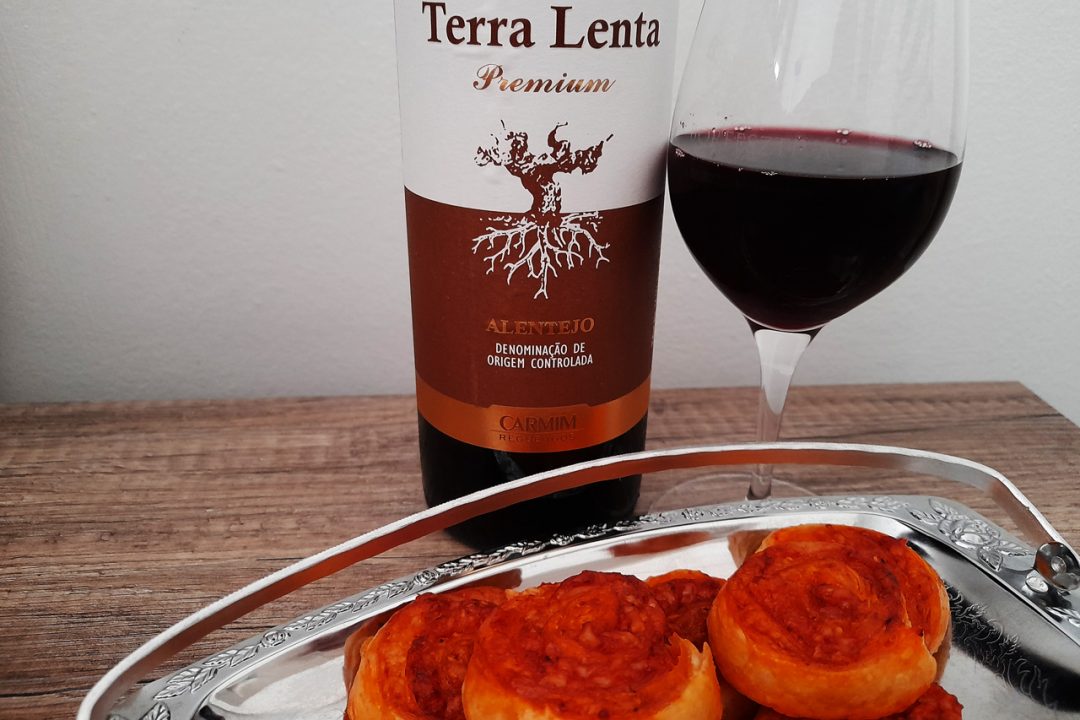 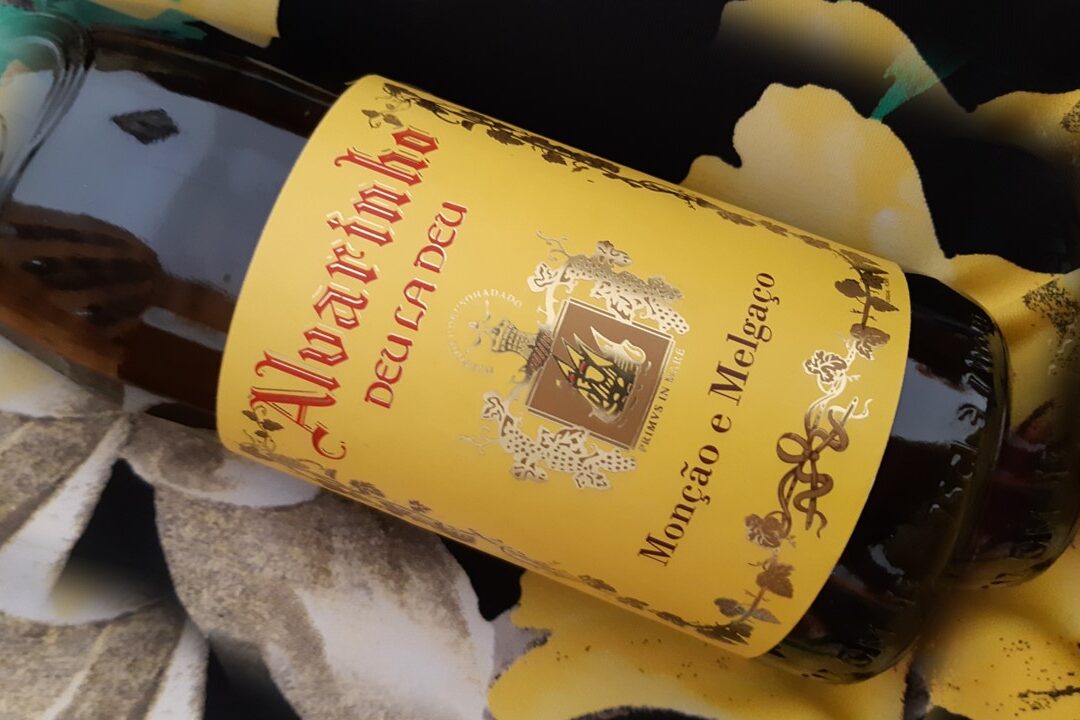