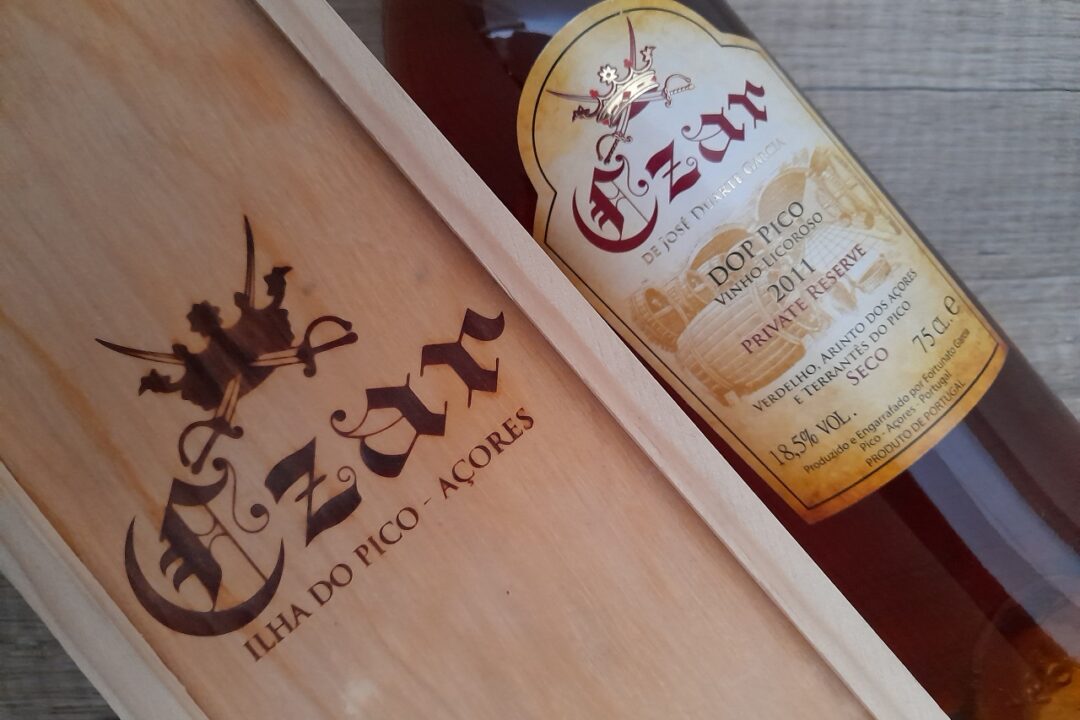 CZAR 2011, Vinho Licoroso from Pico Island of Portugal.  Produced in the middle of the Atlantic, on Pico island’s centenary vineyards growing on top of volcanic rock, Czar is the only wine in the world that naturally reaches an alcohol level of 19%.

The Czar Vineyards are located in Criação Velha, Pico island, Portugal, which was recognized as Unesco World Heritage Site in 2004, due to the extraordinary man-made landscape of the site. Here the vines are planted within the fissures of the solid lava rock, protected from the ocean and wind by a pattern of orderly, long, linear walls.

The almost forgotten species of Verdelho, Arinto dos Açores, and Terrantez do Pico are the only grapes planted at their vineyards. 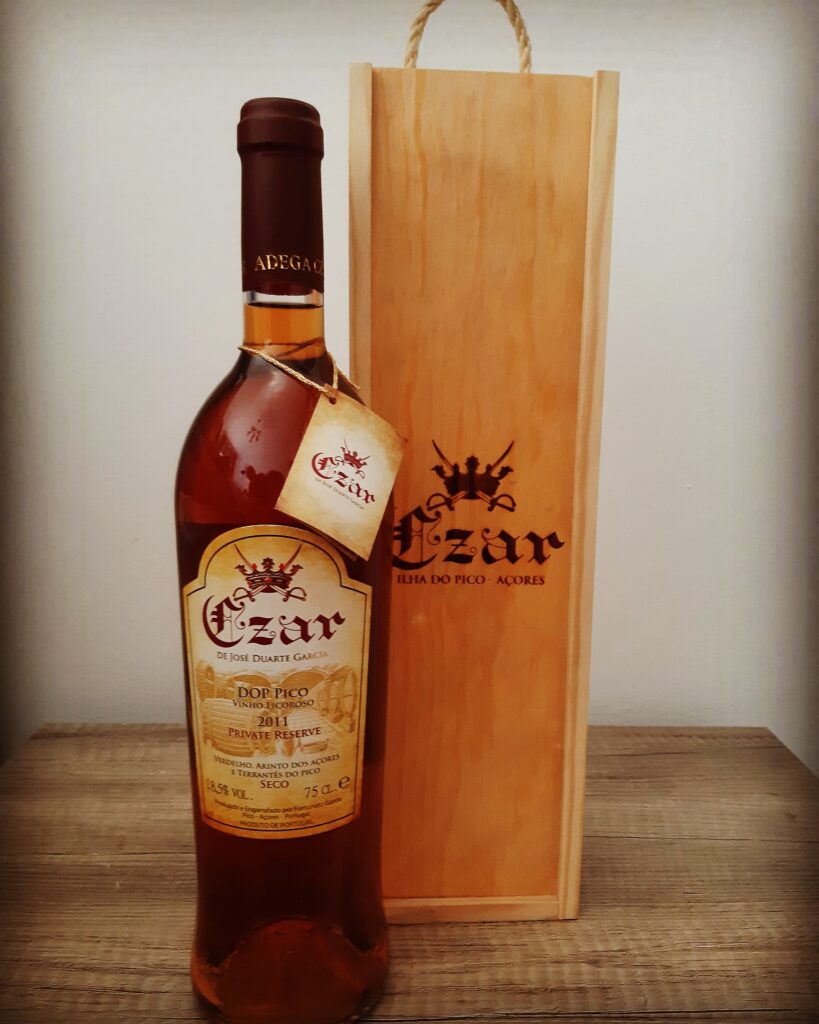 Licoroso wines – a late harvest or fortified style with a minimum of 16% alcohol by volume – have a long tradition on the island. The vineyard of Criação Velha was originally planted in 1690 and these wines were produced in considerable volume in the 18th and 19th century when they were successfully traded overseas. According to the winemaker, there is a reference to the island’s wine in Tolstoy’s ‘War & Peace’.

In 1820 more than 23.000 liters of Pico’s late harvest wine are sent to Saint Petersburg alone, where the richest court in the world resided, Czar’s court.

Unfortunately, the mildew, oidium and phylloxera essentially placing wine production at a halt in 1850 and islanders turned away from wine production and instead lived off the ocean’s oil-rich resource of sperm whales for income. The Pico’s traditional wine is slowly being forgotten, with the grapes of Verdelho and Terrantez, crucial for its production, substituted by more resistant grape types. Only Criação Velha vineyards kept these traditional grapes.

But the most islanders including José Duarte (the winemaker Fortunato’s father) continued to make table wine for family and friends. In the 1960’s José bought the Criação Velha vineyard and began making licoroso wines with the dreams of bringing Pico’s wine to its former glory.

Originally, nothing was bottled, most of the wine that he produced was drank with his family and friends.

But after José read that a great quantity of Pico’s late harvest wine was found at Nicolau II, the last Czar, palace cellars in 1917, he decided that “Czar” would be the perfect name for his wine and from 1970 he started bottling his wines under the Czar brand. He hand draws the Czar logo and its first label. And to this day that same logo is used on everything Czar.

In 1970, the first official bottle of Czar is sold. Only a single bottle from the 1970 Czar is known to still exist.

Vintages did not appear on labels until 2000 and were sold mainly to locals and tourists. 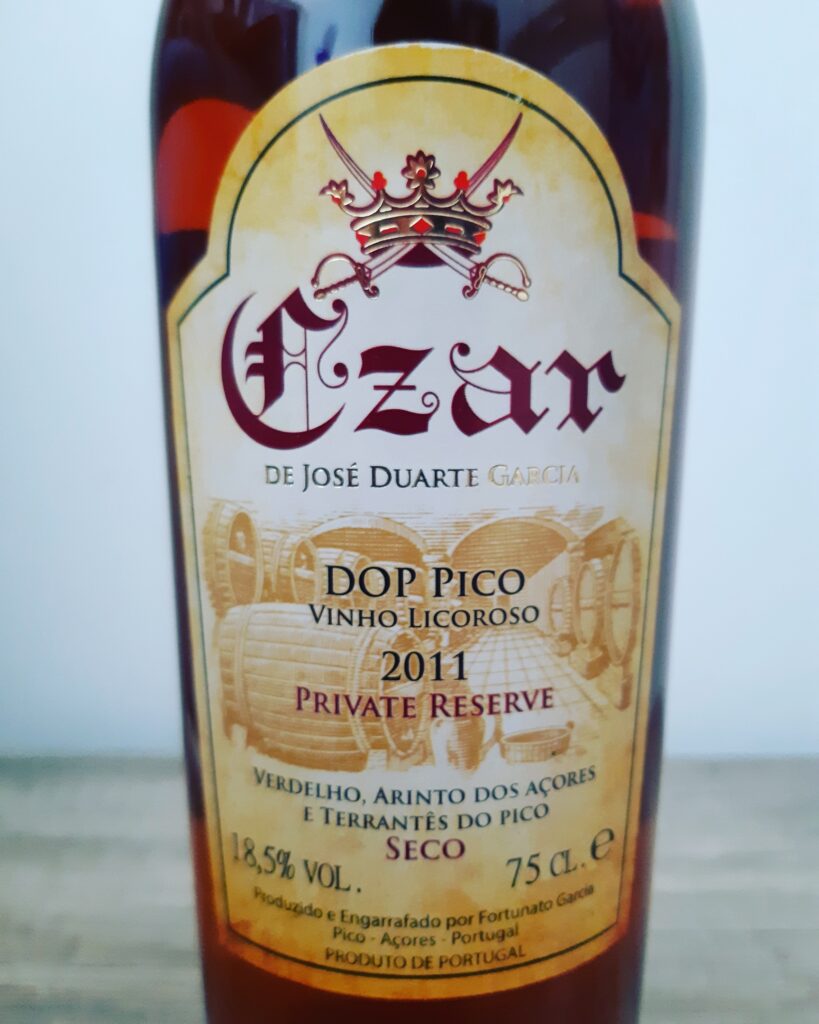 In 1989, José Duarte’s son, Fortunato, joins the management of Czar with the goal of showing their wine to the world. He took over the business completely after his father passed away in 2007.

In 1999, the Czar wine is awarded a gold medal at the first Azores wine competition. And in the next decade, the wine was sold out in months.

In 2011, Pico’s late harvest wine, Czar, returned to Russia to win the gold medal at the Moscow International Wine Fair. And after two years, the Portuguese Público declared Czar as part of Azorean history and heritage.

In 2018, the Czar gained international acclaim and was featured in Decanter and Jancis Robinson.

Over the years, Czar has grown with the addition of three more vineyards as well as reinstating the rest of the original vineyard. The production is now 2-3,000 bottles on average although there have been years with less.

The Czar wine is exported on some islands of Azores as well as on the mainland, in Lisbon and Porto. The company also sells to individuals in many other countries, mostly central Europe, but also Canada, the USA and China.

The winemaker is strong of the opinion that Pico Licoroso should be about salt, acidity, and never too much sugar. And the Czar wines all have a lot of acidity and none a lot of sugar, and there are the grapes of Arinto dos Acores, Terrantez do Pico and Verdelho in all of them.

The winemaker – who only makes licoroso wine – usually harvests after 15th September.  Ideally, he is looking for potential alcohol of 19 or 20%. Then the grapes are pressed, then naturally fermented before going to old French oak barrels. After the fermentation, the wine reaches 18,5% alcohol content.

Since they never fortified Czar, the resulting style (sweetness level) is simply a product of the vintage. This is why each vintage is different.

Czar has aged for 5 years in a barrel because they noted that, with more years, the wine would gain richness in the nose and in flavor.

Humidity is good, always around 70%, but the cellar is warm. The winemaker estimates that each barrel loses around 20-30 liters to evaporation.

Garcia is very proud that his wines are the only commercial examples on the island not to be fortified or sulfured to arrest the fermentation process. 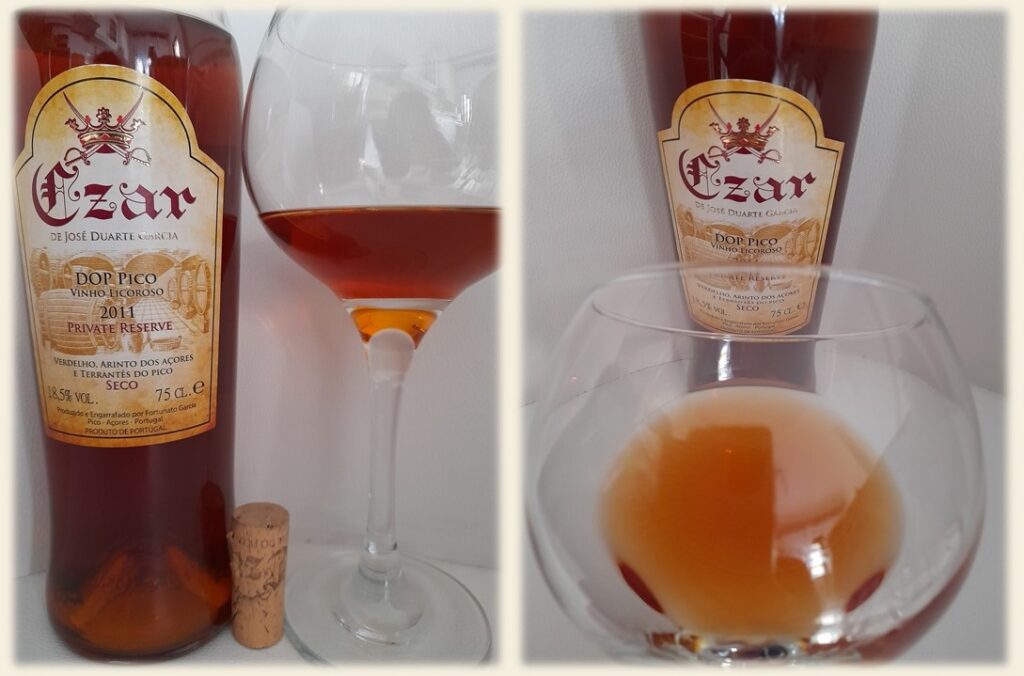 This wine is a blend of Verdelho, Arinto dos Acores, Terrantez do Pico grape varieties, from the very good vintage of 2011. It’s a deep amber color.

On the nose, notes of walnut, caramel, malt and tobacco, which continue through on the palate with aromas of raisins and apricot.

The wine has impressive delicacy, freshness and structure, with a touch of salt in the background.

Harsh dryness crashes the back palate with penetrating acidity, in a long finish. A complex wine, the alcohol (18,5%) is assertive in its warmth.

You can accompany it with starters, desserts or simply drink it as an aperitif or alone. 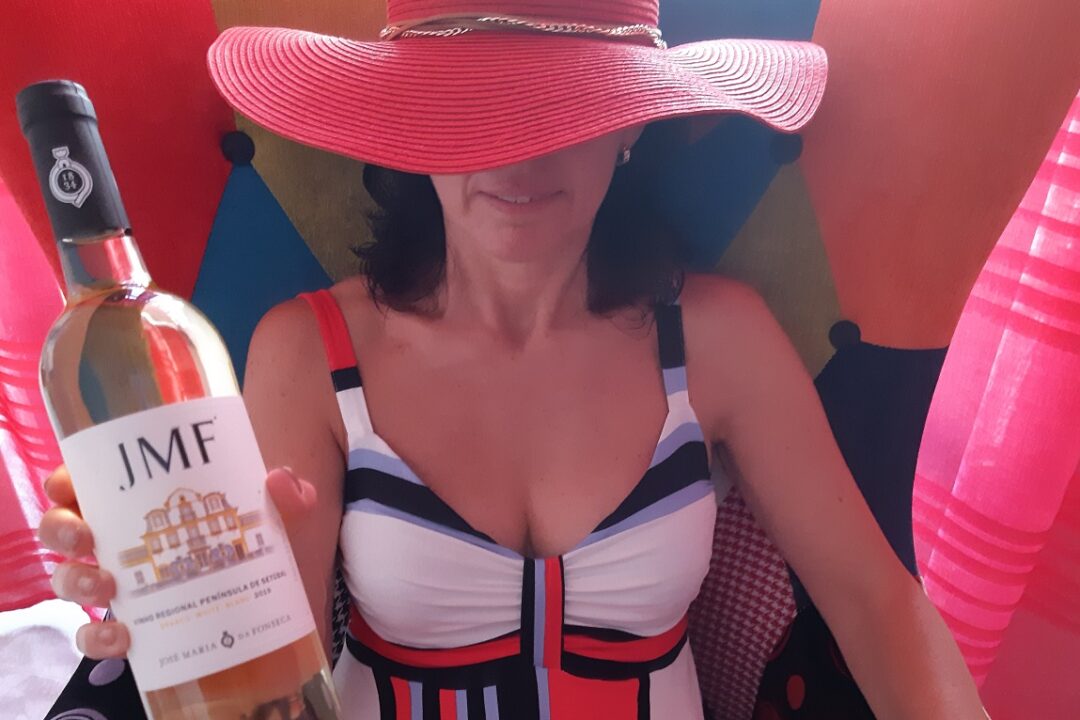 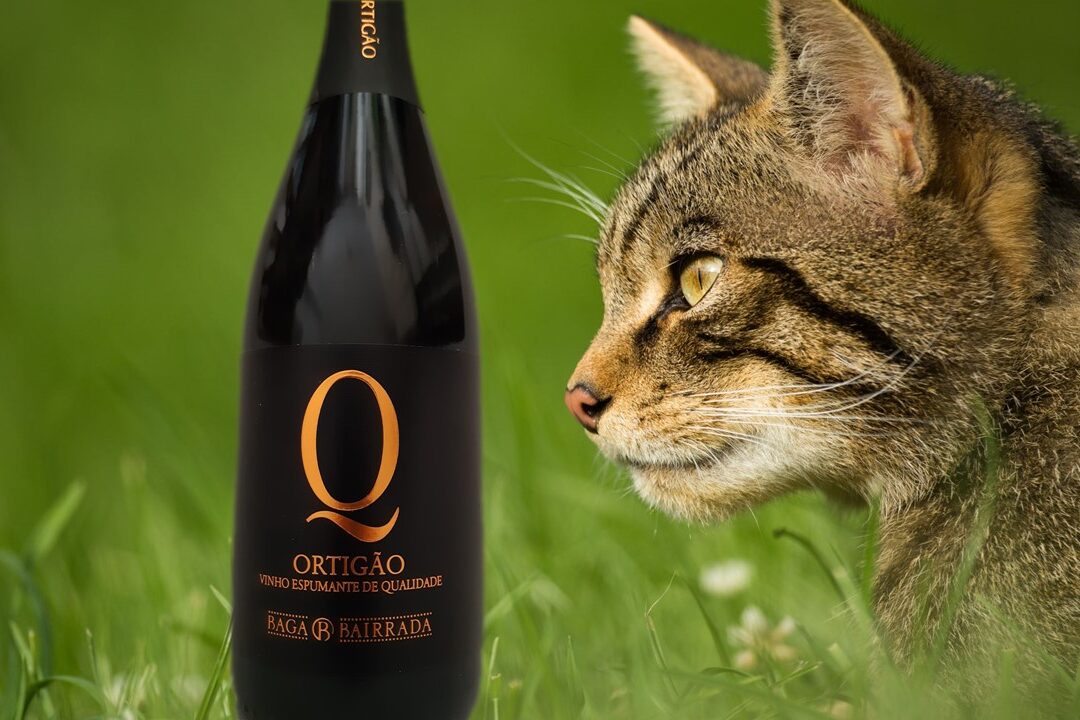 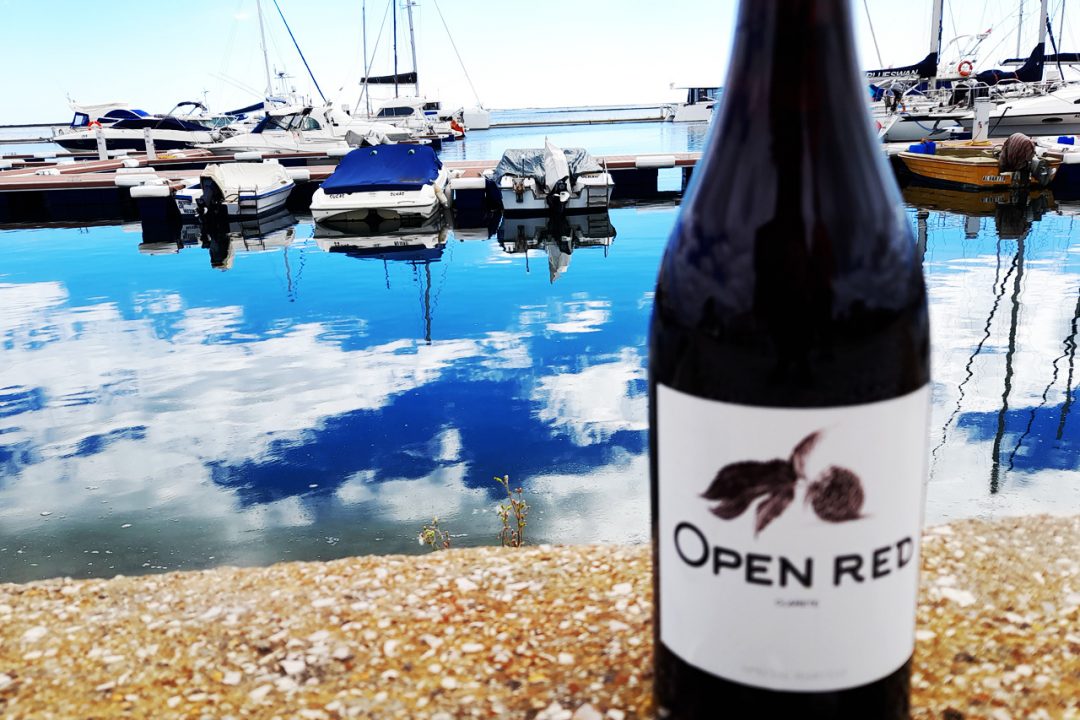